The ATV Snowblower Low Down – What You NEED to Know

If you live in an area that gets a lot of snow in the winter, you may want to think about getting an ATV snowblower.

Besides them just being cool, think about all the money you’ll save from having to pay someone to keep your driveway clear.

Or think of all the back-breaking work you’ll be able to avoid if you don’t have to shovel it all yourself.

Especially if you happen to have a fairly long driveway.

In case you’re wondering, “What is ATV?”

Before we get too deep into this stuff, let’s make sure we’re on the same page.

ATV is short for All Terrain Vehicle and is mostly referred to as a quad or four-wheeler.

It’s designed for a single rider. (This is the main difference between an ATV and a UTV).

It’s rugged, tough and has aggressively treaded tires so it can handle muddy or slippery surfaces.

There are many different things that an ATV can be used for, but for our purposes here we will focus on using ATV for snow removal. (By attaching a snowblower to it!)

What is a UTV? 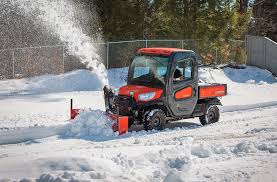 UTV stands for Utility Terrain Vehicle and let’s people ride beside each other (just like in a truck).

This side by side riding is why some people refer them as SXS.

Although the UTV and ATV may appear similar, the UTV operates on a different drive system from that of the ATV.

Compared to an ATV, UTVs are more expensive, but just like the ATV, UTVs can serve various purposes. However, our main focus in this article is on snowblowers for UTV.

ATVs and UTVs are mostly used for recreational purposes to drive through rugged terrain that regular vehicles can’t get to.

But they can also be used for other purposes to.

From hauling small loads with a trailer to moving snow they can be very versatile and effective.

And if you live in a northern climate with a lot of snow, all you need is a snowblower attachment.

In most cases – even with the distinct differences between an ATV and a UTV-  snow blower attachments can be mounted on either an ATV or a UTV and still work.

What is a Snow Blower? A General Overview

A snow blower is a machine that is used for removing snow from an unwanted area like a sidewalk or driveway.

They come in all different shapes and sizes – with varying widths – depending on the size of the job they need to accomplish.

They can be either a stand-alone version (where you walk behind them as they go) or as an attachment (like on a UTV or ATV).

What Are ATV and UTV Snowblower Attachments?

An ATV or UTV snowblower attachments are not unlike a lot of other attachment you find on tractors, or skid steers.

In most cases, ATV snowblowers mount right to the front of an ATV or UTV.

They are often moved up or down with a winch, so you can avoid various obstacles as you try to remove the snow.

The nice thing about using a snowblower as opposed to a plow is the snow is thrown out of the way.

This means you won’t have huge piles of snow at the end of your driveway like you would if you had to push it with a plow.

Needless to say, ATV snowblowers have become a huge hit with ATV and UTV enthusiasts. 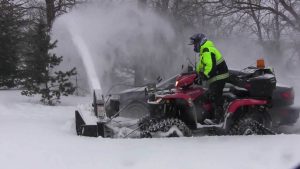 Choosing the Right Snow Blower for your ATV or UTV 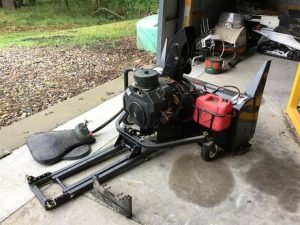 When choosing a snowblower for your ATV, there are a number of different things that you need to keep in mind.

A lot of ATV snowblowers have the same general look and configuration, with the only obvious difference being the size.

And size is extremely important for you to consider.

You want to get a snowblower that’s large enough to do the job quickly, but not too large that your ATV or UTV can’t handle it.

Of course, the cost factors into this as well.

One of the most important things for you to watch for is how your ATV snowblower attachment will be mounted.

The majority of them need a winch in order to mount them. So if your ATV or snowblower doesn’t have a winch yet, you’ll need to get one that is both compatible with your ATV and is strong enough to raise and lower the snowblower.

General Features of an ATV Snowblower

1. ATV snowblowers come with electric controls. These control the engine starting, the throttle, when the snowblower engages, when the winch lifts it and so on. In some cases, the snow deflector (the tube on top of the snowblower that the snow shoots out of) might be controlled electrically too.

2. A sawtooth auger system. These are the blades that cut through the snow and ice that you’re trying to remove.

3. They have a reversible and replaceable long-life wear strip that protects the base of the snowblower.

4. Skid shoes that can be adjusted and even replaced to ensure you move smoothly through any kind of terrain. These are the little dome-shaped attachments that are at the corners of the snowblower. They are are threaded into the blower shroud.

5. They are generally pretty easy to hook up to your ATV. Oftentimes an extendable frame is passed undereath your ATV and is hooked up to the rear ball hitch. And then dolly wheel frames support the weight of the snowblower upfront. Chains attach to the front axles through various brackets.

6. They often come with different horsepower options for the snowblower. This means you can match the power and weight of the snowblower with what your ATV or UTV can handle.  Most people opt for either a 15 HP engine or a 22 Honda engine.

So there you have it! A general overview on exactly what an ATV snowblower is and what it’s used for.

But maybe a snowblower isn’t your thing. Maybe you’d like a plow instead?

Well if that’s the case, make sure you check out our review article on different ATV snow plows here.

Be sure to check back often! We’ll be reviewing different ATV snowblowers and accessories to help make your life easier. In fact, we’ve got a quick review of a snowblower right here.