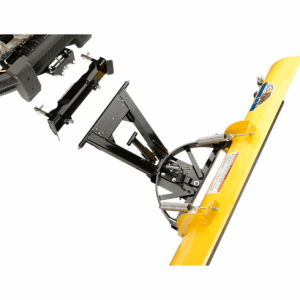 Well, where do I start?

And along those lines, if you live in a cold climate (like I do in central British Columbia, Canada) you need to be prepared for winter.

A huge part of that is having the proper equipment for the job at hand.

And when it comes to clearing snow, the old manual snow shovel just isn’t going to do it.

When we first got our place, our driveway was about 100 feet long.

And it snowed. And snowed.

The first year, we got over 12 feet of snow. (No, not all at once. Cumulative. Like if you added all of it up over the whole year.)

So I was out there shoveling the driveway like a mad man. It seemed like it snowed nearly ever day!

And I got tired of it. So we got a snowplow.

Moral of the story? If you live where you get a lot of snow, you HAVE to get a snowplow or snowblower.

Back to the Moose Snow plow Review 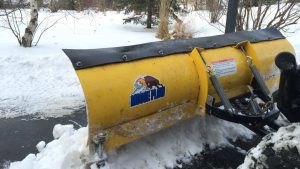 I had it rigged to a Polaris Sportsman 500 and the installation and manual lift system worked really easy.

As this was a test, I wanted to give try it out on driveways other than my own.

Might as well do a good deed while testing and kill 2 birds with one stone, right?

Well, that and I typically tell the neighbors I’m happy enough to work for beer.

I’m not a big fan of having to raise and lower a snow plow manually.

Yes, I’ve been spoiled by being able to use a winch to do all this manual labor.

I really don’t think it would be a big deal for anyone who is just plowing their own driveway.

But if you have plans on making a few extra bucks clearing driveways in the neighborhood, you’ll be wishing you had the winch system.

The Moose Snow plow Itself

Let’s be clear – this plow is quite rugged.

If you’ve done any plowing before, you know that snow covers all sorts of interesting little obstacles.

From curb edges and concrete steps, to fire hydrants and snow-covered pots.

It can all be a bit of an adventure.

And that’s where you want the plow you’ve got to be able to take some abuse.

And the Moose ATV snowplow can handle abuse with it’s rugged design.

While we’re on the subject of missing things…

This might not seem like a big deal at first, but once you’ve plowed for a little while you’ll come to love all these different adjustment points.

The Moose ATV Snowplow is said to be the strongest on the market.

I feel that’s kind of a hard claim to make.

Is it strong? Absolutely.

Is it the strongest? Who really knows?

But it can certainly stand up to some abuse.

UTV’s take it from there, having a model width 72″. And these 72″ wide guys come with the rubber plow flaps.

In all fairness, it is a nice option to have something angling the snow back down a little.

It might keep some of the snow from blowing back in your face.

Of course, if you’re running a UTV in the winter without a windshield, you must be a glutton for punishment.

Plowing Performance & Do You Get the County or Straight Blade? 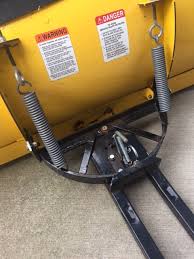 The Moose ATV Snow plow does a great job of plowing.

The snow rolls nicely off the blade and I loved the yellow color.

For me, I’d opt for the yellow powdercoating finish.

I know that the matte black looks cool. But I think being able to see where the plow blade ends will end up being much cooler in the long run.

But good on Moose for going with powdercoat instead of just wet paint.

At least powdercoat’s stronger and can stand up a bit better to some mild abuse.

And when you’re plowing your equipment faces all kinds of different abuse.

Makes it really easy to see where you’re at when you’re plowing. (That said, I’d still get some ATV plow markers like these.)

Especially if one of your neighbors paid in beer 🙂

One thing that I’d HIGHLY recommend if you get the Moose ATV Snow plow.

Get a complete extra set of mounting pins for the different attachment points.

And this isn’t necessarily specific to any Moose products – it’s just that if you shake a pin loose, it can make life a bit more difficult.

Ok so here we go.

I think it depends on what you’re trying to plow.

The Moose County plow is bigger and heavier and can throw snow further. This is because the blade is larger and has a bigger radius curve to it that let’s snow fly further.

But that’s if – and only if – you have the speed to move the snow.

If you have a driveway with a lot of obstacles (or if it’s uneven) you won’t be able to get much speed up.

And if that’s the case, the bigger radius won’t make a difference for how far you’re able to throw the snow.

If your driveway is poker straight, is a consistent height and you can really open up your ATV or UTV… then maybe the County plow is worth getting.

But for me, I’d stick with the standard plow.

It’s a bit lighter and won’t put as much wear and tear on your front suspension.

And it’s cheaper. Which matters.

So for the extra money, I don’t think it’s worth it.

If you’ve got the money, and would rather get a snowblower you should read this article first.

It will help give you a bit of an understanding of what you need to watch out for.

And you can have a look at one of our ATV snowblower reviews here.